The video above shows how I repaired a large soft dent from the rear wing of this MG TF. Often large dents can seem a little bit overwhelming especially when we're just starting off learning the Paintless Dent Removal. Although this dent is relatively large, it is soft. There's no real sharp edges, no real complications. So nothing to be scared of, it's all about how and where to start pulling.

Now there's a couple of crowns that really hold this main bulk of the dent. To start to release that tension, get the metal flow. It will really maximize your efforts with the PDR tools and techniques.  I begin by warming up my panel and also warming up my cold glue. 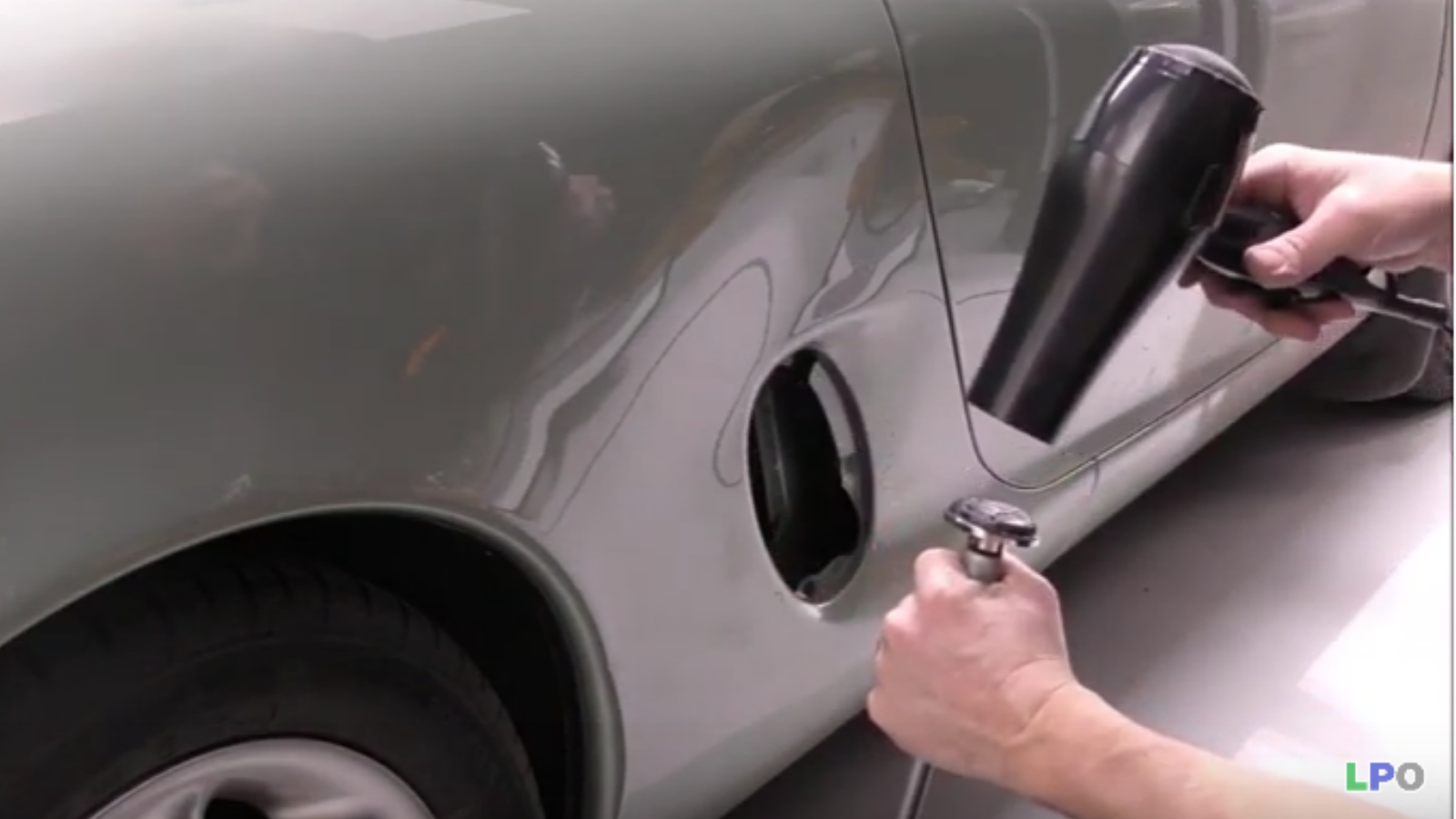 I’m going to start this repair at the very top edge, the deepest point. The yellow line indicates the crease line, the deepest part of my dent. The green lines either side of my crowns. so applying my glue tab with just that slight twist in motion really helps to glue a deer to the panel. A couple of light taps before giving it a few harder pulls to release some of that tension. 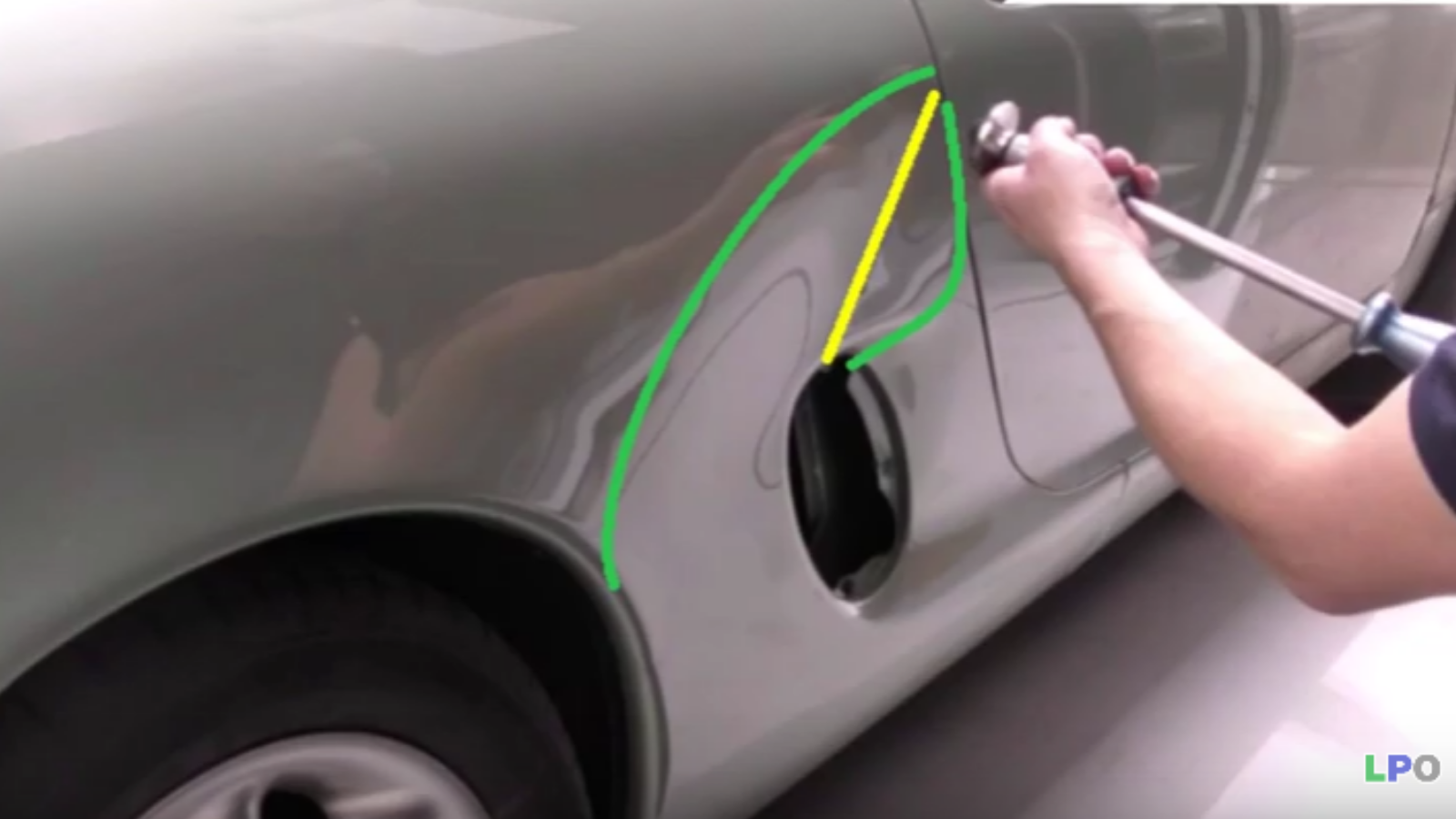 Now what I'm looking to do is take these crowns and bring that metal flow inwards. That's effectively going to make the majority of this dent pop out. As you can see relatively quickly we've taken it from a large dent to a much more manageable smaller dent.

Now with this particular repair there's about three or four little parking dents that run along the rear wing. These are separate to the large dent damage but I want to really clean the whole panel up. Using this little hockey stick bar I'm able to gain access through an inside interior hole into the panel. That gives me access to the upper section of the wings.

Coming back to my main dent area I'm going to use my double bend bar with a small extension piece, that familiar R4 tip with a red cherry cap. Now there's tons of open access on this panel. By removing that grille I can access all of the panels that I need to start removing the remainder of this dent. 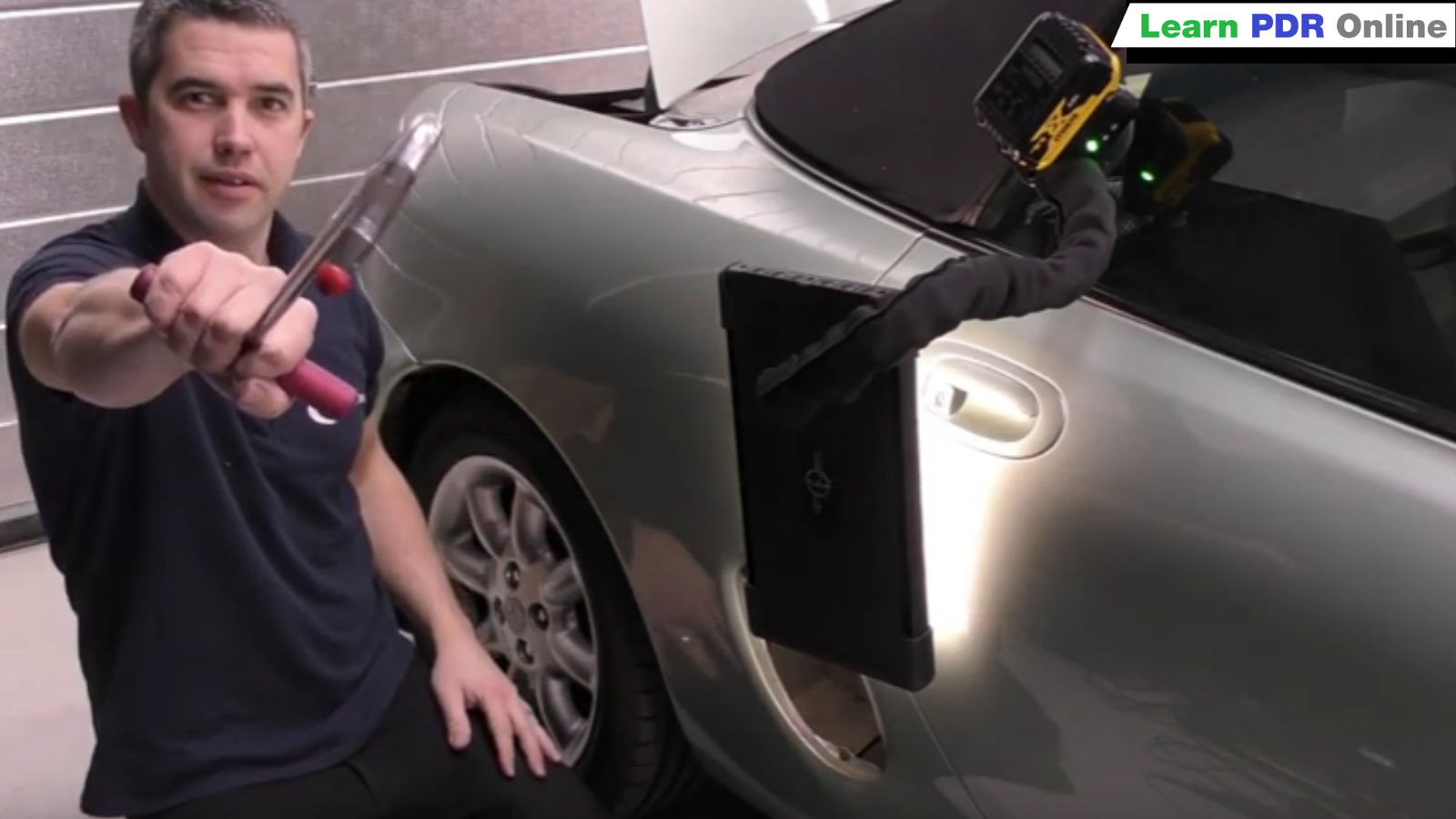 I've now also switched to the Elimadent version 3 as I'm working indoors. It's a really great feature being able to change the  brightness of the lights. Changing between that warm amber glow to the cool bright white. A few Fog users you may pick up here, there is a slight shadow in the panel.

So I'm going to speed up this process and we'll start to see that low being reduced. Then fresh line board users, here's another angle of that same process. Again just working myself down that low section bringing it all back up into the lines. Switching to this angle you can see just how much I'm moving my head around. Left, right, forward, back, trying to get a good perspective. 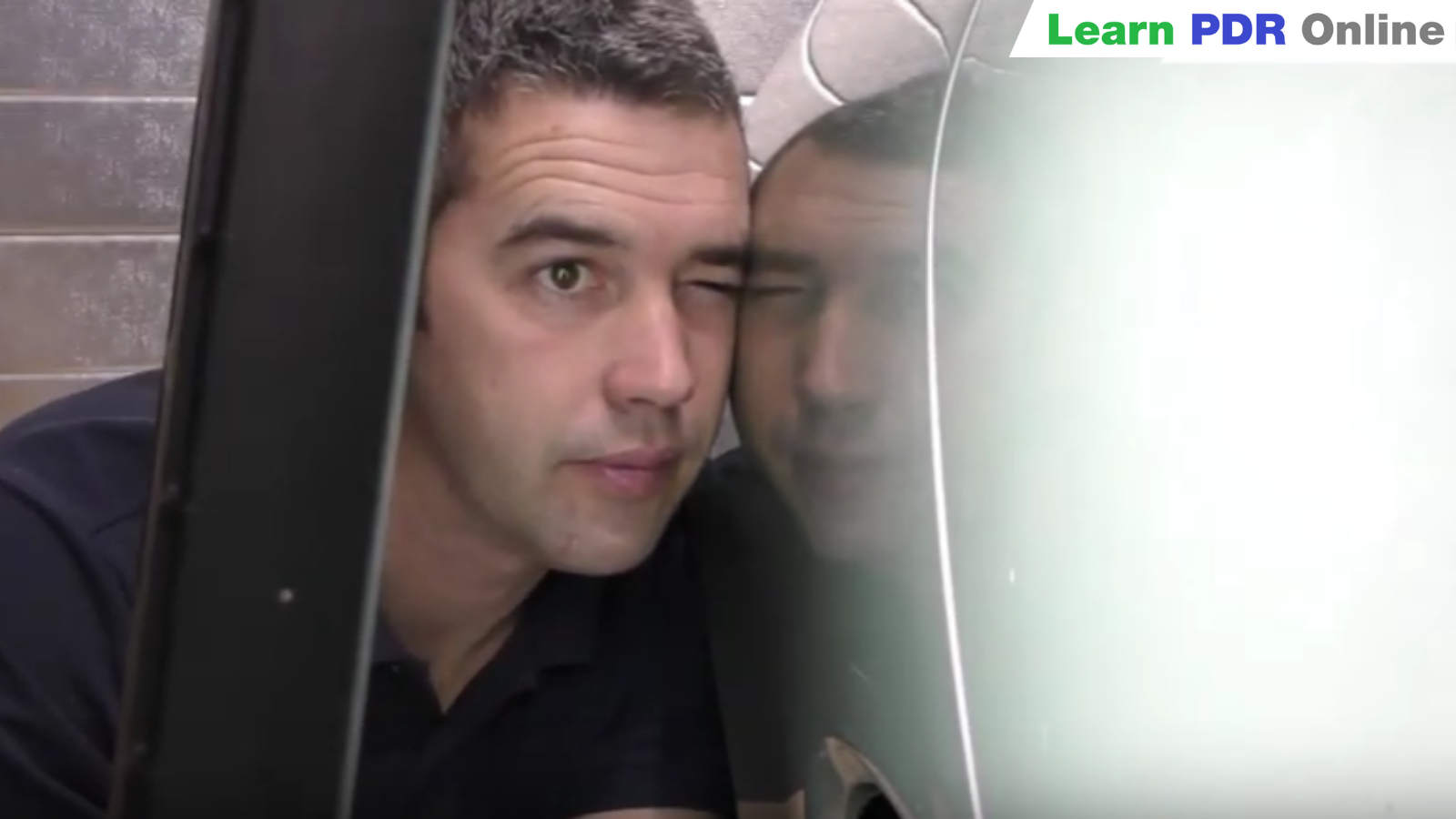 I can fully read my dents and cross check as I go starting to remove the damage now whilst my DIY crown slapper. I really needed something soft to be able to take down these shallow crowns softer than any tip I had. So I've just wrapped a few sheets of leather over the end of my hammer and some gaffer tape. It works an absolute treat.

On the remainder of my dents we can see with the yellow line I've got a crease that runs from my panel.  I've tilted my line board, a slight 45 degree angle creates this S shape or lightning strike bolt through my reflection. Now that's my tip for working on creases. It really helps me identify the center of a crease line when working on crease dents. 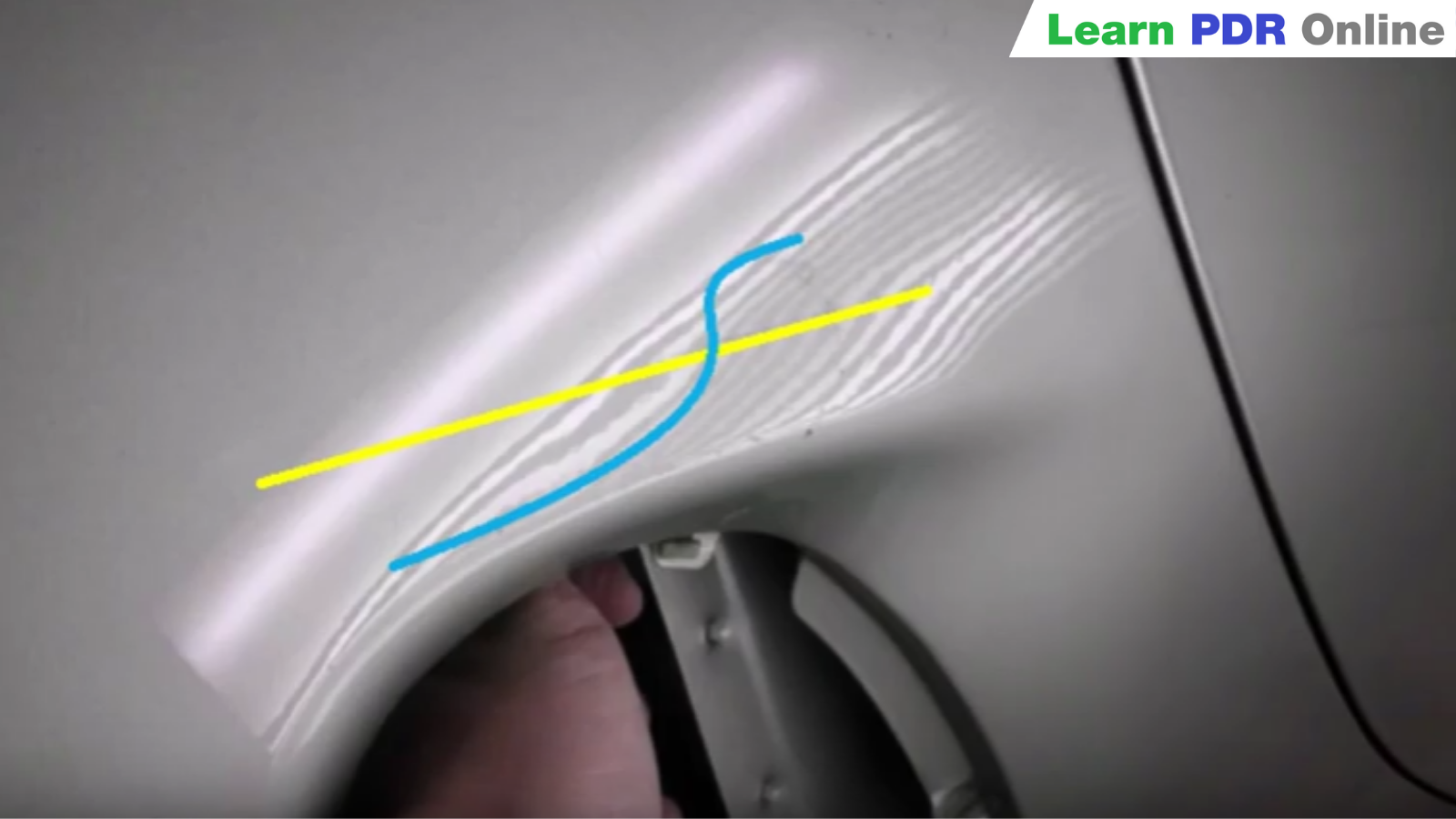 We can see that process again and just work on the panel until those lines read through. The majority of my repair was probably tapping down crowns and tension. Once again using this very high-tech hammer I'm taking down some of that soft crown damage. Really kind of working the overview of the panel.

There's just one more parking dent that sits above the wheel arch. I couldn't access it from the back so I'm accessing it through the open grille. Speeding up that process you can see the movement on those lines taking out the low. Then just a quick tap down on a high spot that I created with my tool during that pushing process. Now I'd probably spend 50% of my repair time tapping down crowns. 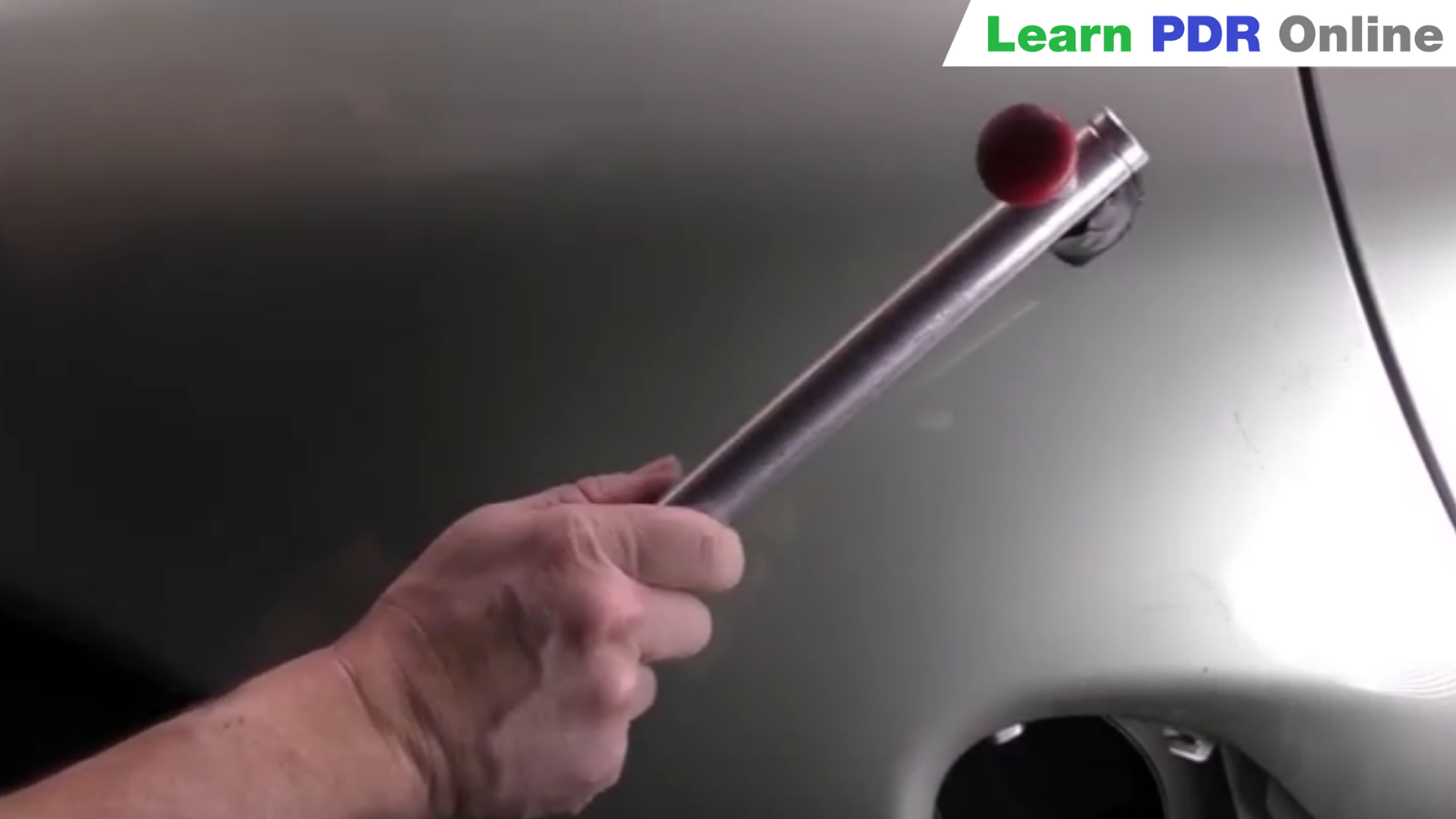 As you can see from my body position I've got myself quite far back and my light ball is set up quite far away from me. So probably a meter and a half in front of me when I start repairs. I generally have my eye line and my board very close to the repair. As the dent starts to come out and I head towards the finishing stages I pick more distance between myself and my reading device. That gives me a fresh perspective to be able to finish the repair.

The full repair tutorial for this particular repair is available at learnpdronline.com I hope this video gives you an insight into repairing large damage quickly. Not being too overwhelmed when the dent is soft. Just know what tool to use and where to start that pulling process.

Learn how to remove dents, learn a new skill! Get started!