There's about four or five dents and they're fairly large but quite soft so there's no paint damage. This  damage was caused when the owner was cleaning his car. Leaning up against the roof rails it put a few dents in the driver's side and before he noticed he'd also put a couple in the passenger side as well.

Due to the lack of access being able to get rods into this part of the panel we'll be mostly doing glue pulling  and a lot of blending around as well.

Step #1.  Heat Up The Glue Gun & Start Cleaning Off The Panel

While heating up the glue gun we will also start cleaning off the panel. Just check the temperature and then we can start  doing a bit of pulling.

And now with the line board set up have a and have a good look. As you can see the lines appear a bit tight either side that may well be just kind of a bit of a  trick of a light because there's a low spot there.

This part of the damage could possibly be just blended out. So I'm going to be using my slide hammer as opposed to the lifter because I think quite often on roof rails doing soft damage like this and can see how soft that panel is by the way it's dented . By the time it is set up around the dent I probably won't be able to see the small low spots either side of it. So we're going  to be using a slide hammer for doing this repair.

After a couple of pulls I've pretty much reduced that big low left a couple of light high in there you really see the way it's distorted the metal against that reflection of the line board. 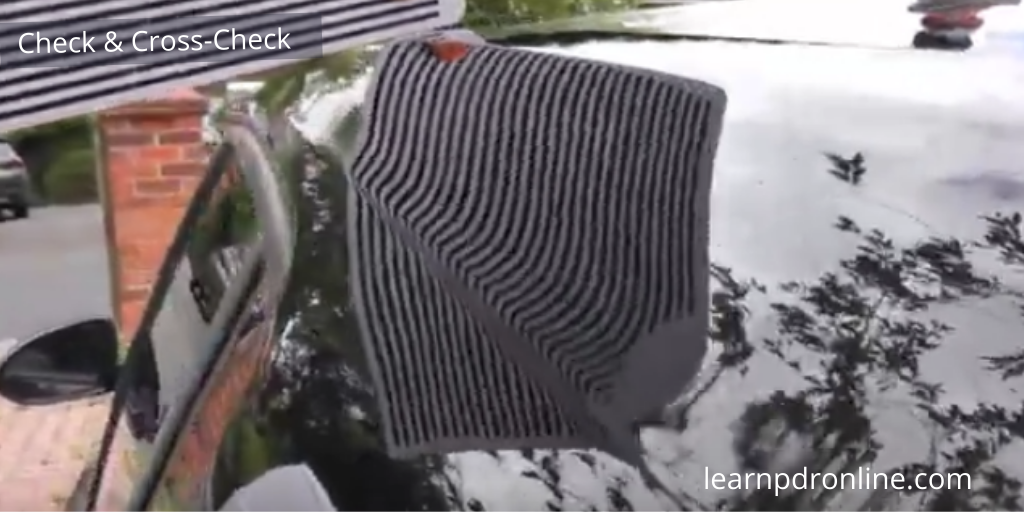 Now for this I'm using the cro carb tap down that's the one with the kind of small leather pad on the bottom and it's perfect for kind of taking out some crowns and also working on soft panels like this. I don't want to put many little dents with a tap down.So having the crow carb with that soft leather pad is ideal. And here I'm using the Shane Jacks  blending hammer. Now I'm using this end of it more of the process  of a tap down and hammer. It's quicker just to keep it all on this one tool.

And then back for some more glue pulling and I'm sticking with these work tabs because they're working really well with me today. Pulling just about the right amount of metal and keeping it nice and soft and I'm using my lightweight aluminum slide hammer from BLE tools.

And here you can see where the lines pinched together . I've created a bit of a high so I'm back to tapping that down. But when I can’t quite get the accuracy flip to my root beer tap down making sure I keep everything I do nice and soft. And as we run the camera around we can really start to see that panel taking shape. Still a bit low. So a bit more blending to do but it's coming out really well.

So I'm pleased with how that roof rails come out a little bit of glue pulling, some tapping around , a bit of blending  but it's come out just fine now. Now the driver's side  has got three or four that are a little bit closer together and it's exactly the same process I'm going to be doing. So it's a really soft panel which is good and bad as long as you know it means it's quite easy to work with and you ​can really kind of tap it around.

To learn more about glue pulling,blending, finishing, tool selection, how and where to start a dent, come and join our PDR exclusive community! Kickstart your PDR career!